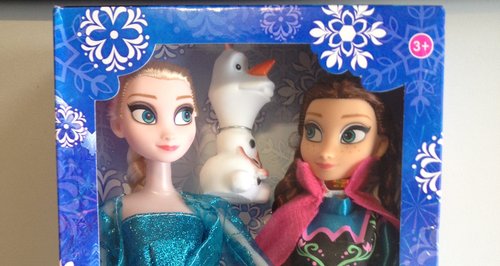 Hundreds of items of counterfeit 'Frozen' merchandise, including dolls and costumes, have been seized in Barnstaple and Ilfracombe by Devon and Somerset Trading Standards service.

Investigations are continuing, but the authorities have issued a warning, alerting people to the potential dangers.

Concerns growing that children could be playing with these potentially dangerous dolls or wearing costumes which are highly flammable.

"We're asking people to exercise caution when buying 'Frozen' merchandise, and to look out for some of the tell-tale signs that could indicate that a product is counterfeit; such as missing Disney logos on the labelling, a suspiciously low price, poor quality and labels that appear to have been poorly copied."

Counterfeit merchandise is usually untested, poorly made and untraceable.

If toys containing these chemicals are chewed, they can lead to damage to the reproductive system and an increased risk of asthma and cancer.

The dangerous bracelets were discovered when a suspicious mother cut one open and found that they were made from a metal measuring tape.