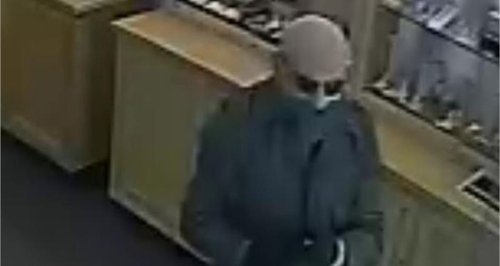 Police have released CCTV images as they continue to investigate an attempted robbery at Coopers Jewellers in Barnstaple.

A man wearing a mask went into the shop on Thursday 28th May, but got away empty handed after the shop owner fought him off with a baseball bat.

Senior Investigating Officer Detective Inspector Praveen Naidoo said: ''The offender is wearing a mask in the photo, it is possible that this may have been discarded by the offender leaving the scene. If any member of the public comes across the mask we'd ask that they contact the police. Also whilst the coat appears darker in the images, witnesses describe it as a light sandy colour.

''The offender may well have received injuries as a result of this incident and it is likely that someone in the community knows who is responsible. I'd encourage them to come forward. ''We are actively pursuing a number of enquiries and are keen to hear from any member of the public who may know the identity of the offender and anyone who may have seen them without the mask."

DI Naidoo added: ''I would also like to reassure the public that we are fortunate that we live in a safe part of the country where incidents of this type are rare.''

Any member of the public who may have witnessed this is asked to contact police on 101 quoting log 596 of May 28 or alternatively call to Crimestoppers anonymously on 0800 555111.