Woolacombe: Best In UK And 4th In Europe 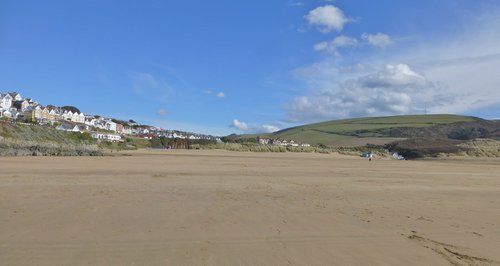 North Devon's Woolacombe Beach has beaten beaches in Italy, Greece, Thailand and Costa Rica to be named among the best in the world in the TripAdvisor Travellers' Choice awards for Beaches.

The Devon beach was named thirteenth best rated beach in the world, and number four in Europe.

Woolacombe Beach also took the title of UK's number one rated beach, while Weymouth Beach in Dorset was named in second places. The award recognises the best beaches in the UK and worldwide, based on the reviews and ratings from travellers around the globe.

Backed by sandy hills and the Woolacombe Downs, Woolacombe Beach boasts a three-mile long stretch of golden sand and rolling, unbroken surf which makes it the ideal hotspot for surfers.

The sheer length of the beach means that there is no shortage of sand to sit down and relax on during the busy summer months.

One TripAdvisor reviewer who recently visited said: "Came here first in 1950. I am still coming here and although there are a lot more people now it is still possibly one of the best beaches in Britain, the clean sand, beach huts for hire, three miles to walk the length and fantastic clifftop walks make this a very special place."

Trevor Stanbury, Chairman of the North Devon Marketing Bureau: "It's fantastic to see North Devon's wonderful beaches getting the recognition they deserve with a coveted TripAdvisor Travellers' Choice Award. Woolacombe Beach is already a firm favourite with both locals and travellers alike and we look forward to welcoming more visitors to experience its beauty throughout 2015."

Devon is also home to two other winning beaches this year, Saunton Sands Beach in Braunton and Bigbury-on-Sea Beach placed 17th and 21st in the UK respectively.

Top 10 beaches in the UK