It's all about the boats, blazers and Pimms in Henley this week.

This year's Henley Regatta is well underway - with thousands of people watching five days of rowing races on the Thames. It runs from Wednesday 4 July until Sunday 8 July.

There are more than 200 races of an international standard, which can include Olympic rowers as well as crews new to the event. 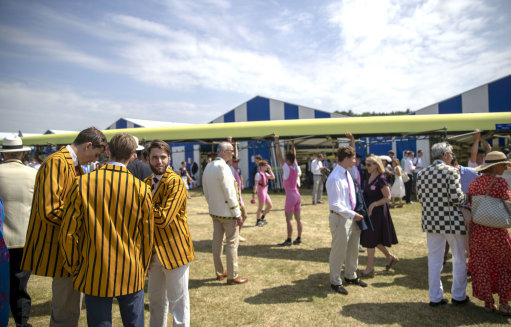 Lots of police are on duty.

Superintendent Sarah Grahame, tactical commander for the Royal Regatta said: "We expect to see an increase in the number of visitors to Henley and the surrounding areas during the five day period.

"My officers and I are working closely with our partners to ensure public safety and to maintain the low levels of crime we have come to expect at this prestigious event.

"I ask people visiting and living in Henley over the Regatta period to be prepared for traffic and some congestion. We ask drivers to be patient and mindful of the increased traffic and pedestrians, to leave plenty of time for their journeys, and to carefully follow the appropriate signs to the allocated car parks.

"As is the case at all major events, there will be a security presence which is there to reassure you rather than alarm you. The public provide our additional eyes and ears on the ground and I ask them to support security staff and my officers by remaining vigilant, keeping their belongings with them and reporting anything suspicious or unusual to staff or by calling 101.

"The Neighbourhood Policing team in Henley will be an integral part of our operation and will ensure the priorities of the local community are acted on, as normal, during this time."