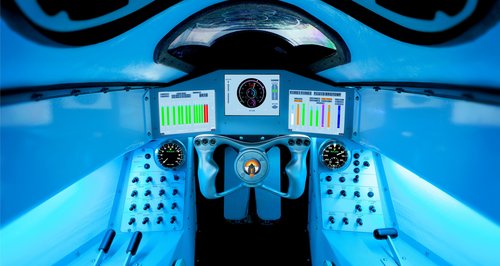 You are looking at the windscreen, controls and displays of the Bristol-built 'Bloodhound' - the 1,000 mph car aiming to become the fastest on land ever.

Although it looks like something out of 1980s TV show Knight Rider, the inside of the supersonic vehicle is a cross between a Formula 1 car and a fighter jet.

The central screen shows the speed in miles per hour and Mach number (Mach 1 being the speed of sound).

There are also readouts for the Bloodhound's jet engine and rockets, while dynamic speed indicators help driver Andry Green decide when to fire the rockets and hit the brakes.

The left-hand screen shows hydraulic pressures and temperatures in the braking and airbrake systems, while the one to the right provides information about the three engines, including temperatures, pressures and fuel levels.

The dashboard also features two precision-engineered analogue Rolex instruments: a chronograph with built-in stopwatch, and a speedometer which goes up to 1,100 mph.

All of these components are cocooned underneath a carbon fire pilot hatch, 50cm wide.

The cockpit walls are painted white to let as much light to bounce around as possible and the carbon fibre seat is tailored to the pilot.