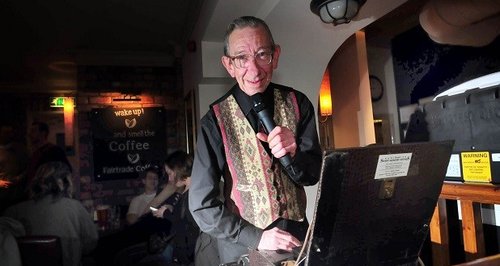 The footage, from The Criterion Pub, Ashley Road, Bristol, shows DJ Derek enter around 11.38pm on July 10th. He is then seen leaving the premises at approximately 00.13am on July 11th.

This is the last confirmed sighting of 73 year old Derek. It's thought he was seen by friends at Yate bus station on either July 16 or 17 at approximately midday. As a result of this new information, they’re re-focusing their search efforts in the Yate area.

There have also been sightings of Derek at Cribbs Causeway and Thornbury so Police are looking into any potential link with bus routes in these areas.

“Since Derek was reported missing on Thursday 23 July, we’ve conducted a thorough and wide-spread search investigation. This has involved detailed CCTV examinations, house to house enquiries and physical searches. We have also had a large number of reported sightings following our public appeal and we are working through all of these. This new confirmed sighting in Yate will mean we will re-focus our efforts in this area and I would ask anyone who was in the vicinity of Yate bus station on July 16/17 to come forward.

I would also ask anyone who regularly uses public transport within Yate, Cribbs Causeway or Thornbury to come forward if they have any information. Any information, no matter how small or insignificant you may think it is, might prove crucial to this investigation. Please contact us now on 101 quoting reference number MP3388/15.”

There was also a sighting of Derek, 73, known locally as DJ Derek, was on CCTV at 11.14pm on Friday July 10. He was seen crossing the road from Rupert Street to Lewins Mead in the Bristol city centre.

He was wearing a brown jacket with a collar, a brown waistcoat and a black top or shirt. Police have reason to believe that Derek then got on a number 5 bus at the stop outside the Whitefriars building on Lewins Mead at 11.20pm where there were a number of other passengers.

Were you a passenger on that bus? Did you see Derek get off the bus? If so, please get in contact with Police now.

It's thought he then got off the bus at the junction of Brook Road and Sussex Place and would have headed on foot towards City Road before turning right on to Albert Place.

If you have any information that you believe may be of help, or you were in the Sussex Place/Brook Road area of St Paul’s at the time please call Police on 101 now quoting reference number MP3388/15.

Anyone using social media networks to further our appeal should use #FindDjDerek.