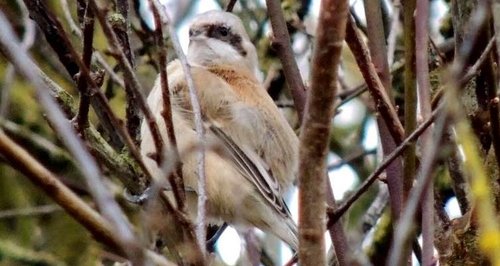 An ultra rare bird was photographed at Dyrham Park this month - the first time a bird of its type has ever been seen in the area.

The small Penduline tit was captured on camera in the car park on March 11, by Twitcher Mick Sheldon who had just been given the camera for his 60th Birthday. He then shared his find on social media – much to the excitement of the bird watching community.

“I go to a National Trust place most weeks and stopped in at Dyrham Park while I was in the area. I parked up and spotted some tree creepers, so I was trying to take photographs of them and noticed this bird in the tree and managed to get a picture of it before it flew away. I had no idea what the bird was, so put it up on the British bird site and it snowballed from there.”

“It is a significant find, not only because of its rarity status in the UK, but it is also the very first time this species has ever been recorded in South Gloucestershire.”

Bird expert Ed Drewitt, who ran a dawn chorus walk at Dyrham Park earlier this month, said the Eurasian Penduline tit is quite common in mainland Europe (mainly south and east) but is rarely seen in the UK.

Three Penduline tits were spotted in Devon this winter with two seen regularly until mid-March, but this is the first one which has ever been spotted in the Bristol area. It is believed this may be the third bird from Devon, which has not been seen down there since the beginning of March.

Ed believes this bird may’ve been stopping for a rest on its way back to southern Europe:

“It is unusual to see a Eurasian Penduline Tit in the habitat you have a Dyrham Park, however, you are based quite high up - so a tit like this migrating back east towards Europe from Devon or Wales would probably stop in trees for a rest and a feed before continuing its journey. “

“The photographer was a lucky guy and caught the bird just at the right moment. I suspect that later that day or at night the bird continued its migration and is probably in the Netherlands or Poland by now!”