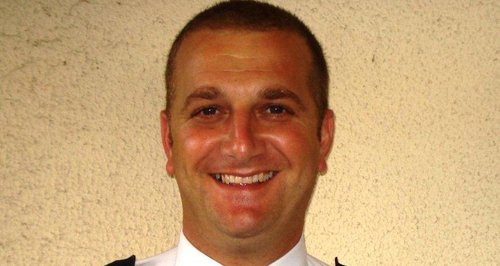 Family, friends and colleagues have paid tribute to Street-based PC Kevin Stoodley, who died suddenly last week after being taken ill whilst on duty.

His wife Emma said: ''We are devastated that Kevin has been taken from us at such a young age. He would have been 41 next week. He was a wonderful husband and father to our children Tyler, 17, Kai, 11 and six-year-old Sapphira and a man who loved his work as a police officer. He had such a lot more to offer and it is so sad for us all that he is no longer with us.''

Mendip Inspector Mark Nicholson also paid tribute. He said: ''Kevin was very popular both with his colleagues and with members of the public. He was a passionate family man and was devoted to his work in the community around Shepton Mallet, Wells and Street. He was a neighbourhood officer who was very heavily involved with our Police Cadets, and he had also worked as a front-line response officer in the Wells area.

''He had the respect of all who met him. All his colleagues are deeply saddened by his death and our thoughts are with his family.''

PC Stoodley's funeral will be held at Wells Cathedral at 10.30am on March 30.