Police in Cambridge have released images of two people they want to talk to, in connection with the theft of designer sunglasses worth £4,500

Offenders helped themselves to a display of the glasses at a store in Lion Yard, Cambridge, at about 3pm on the 23rd May.

Cambridgeshire Police have now released images of a man and a woman they want to speak to in connection with the theft. 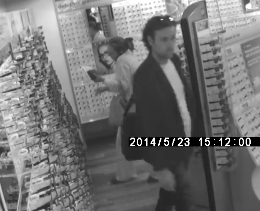 PCSO Gemma Newton said: "I would urge anyone who recognises either of these pictured to call police as we believe they may have important information which could assist our investigation."