Cambridgeshire Police say twenty people who were arrested on Tuesday (September 10) as part of a national operation into high-value museum thefts have been released on bail.

Eighteen men and two women were arrested following a series of dawn raids across England and Northern Ireland including four men, aged 24, 41, 44 and 56 who were arrested at the Smithy Fen travellers site in Cottenham in Cambridgeshire.

All 20 have now been bailed until January.

Hundreds of officers from 26 police forces and the Serious Organised Crime Agency (SOCA) were involved in national operation.

All of those arrested were held on suspicion of conspiracy to burgle apart from a 54 year-old woman who was arrested in London on suspicion of perverting the course of justice and assisting an offender.

The investigation is in connection with six crimes over a four-month period at museums and auction houses across England.

Chinese artefacts and rhinoceros horn were targeted in six incidents - two thefts and an attempted theft at Durham University Oriental Museum and further thefts at Fitzwilliam Museum in Cambridge, Gorringes Auction House in East Sussex and the Norwich Castle Museum in Norfolk.

While much of the property has previously been recovered, several high-value items are still missing.

The Association of Chief Police Officers (ACPO) has set up a working group to crack down on the emerging issue of heritage crime. The group brings together police officers, English Heritage and other partners in the arts and museum sector to share intelligence and crime prevention advice.

Anyone with any information should call Crimestoppers, anonymously, on 0800 555111. 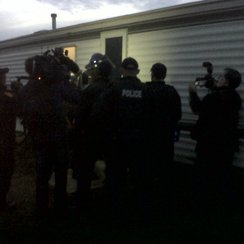