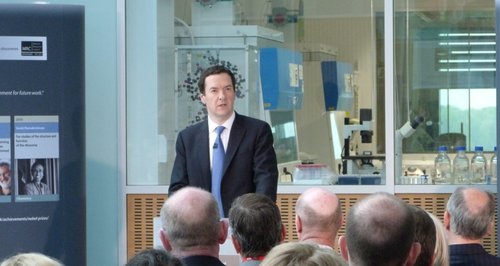 The funding includes £200 million towards a polar research ship for the Cambridge-based British Antarctic Survey.

Mr Osborne revealed more details during a speech at the Medical Research Council Labs this morning.

The new vessel will go towards replacing the UK's two current polar exploration ships, which are nearing the end of their lives.

The ship will have on board laboratories and carry cutting edge technology including robotic submarines and "underwater gliders'' to gather data on marine biology and ocean conditions.

Mr Osborne said: "One of the final frontiers in the world where there is still much discovery to be done are the polar oceans.

Britain must continue to have a presence in these parts of the world.

But our two current polar exploration ships are nearing the end of their life and need replacing.

So I am delighted that we are investing in a new polar research ship to carry cutting edge British technology to put British scientists at the forefront of research in both the Antarctic and the Arctic oceans.''

The ship will be operated by the British Antarctic Survey and will be able to carry out longer voyages than the current vessels.

It is hoped that the use of robotic technology will help pave the way for the development of new industries.

It also makes explicitly clear our long-term commitment to maintaining our presence and scientific excellence in South Georgia & the South Sandwich Islands and the British Antarctic Territory.''

At his speech, the Chancellor also launched a consultation with the scientific community to inform the Government's allocation of the £7 billion investment budget for large capital projects in science and research announced last year.

The consultation is designed to ensure that the money is targeted at areas scientists believe will bring the greatest opportunities for applications in business in an effort to rebalance Britain's economy.

Mr Osborne said: "While as a country we have a proud record in scientific ingenuity, too often it has been other countries that have enjoyed the economic opportunity from it.

Our long term economic plan is about ensuring Britain benefits from its scientific excellence.

That is why we are taking the difficult decision to protect the science budget over the next Parliament.

We are committing £7 billion - no other government has made such a long term commitment.

Today I will be announcing our plan for deciding where it will be allocated, beginning a consultation with both the scientific community - both researchers and businesses - to determine how it should be best invested.

This is part of my personal priority to ensure Britain out-competes, out-smarts and out-does the rest of the world in scientific innovation and invention.

Backing British science, supporting businesses seeking to grow off the back of it and protecting investment in it is a central part of our long term economic plan.

Britain has a proud past leading the world in pushing the boundary of scientific discovery. I want it to be a mark of our future success.''

The next five years will see the largest ever sustained capital spend on science investment.

Our scientists can identify the next Crick Institute or the next equivalent of the Laboratory of Molecular Biology for us to invest in.''