A five-year-old girl who wrote a letter of apology to department store John Lewis after she broke a bauble has been found following a social media campaign. 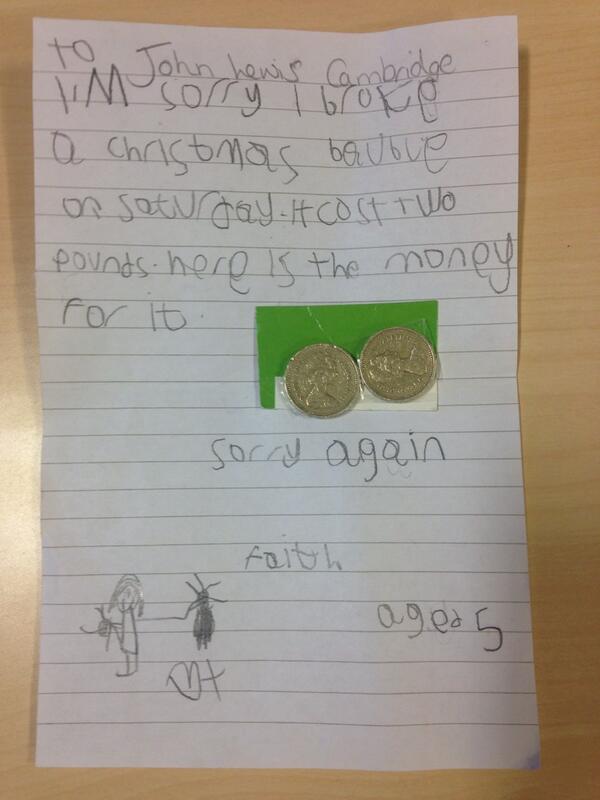 The girl, who signed her name as Faith, sent the letter after she accidentally broke the decoration while visiting a shop in Cambridge.

She stuck two £1 coins to the note, which she posted to the "Christmas Department'' of the store, one of the shops managers has told us.

The letter read: "To John Lewis Cambridge. I'm sorry I broke a Christmas bauble on Saturday. It cost two pounds. Here is the money for it. Sorry again, Faith, aged 5.''

Dominic Joyce, head of branch John Lewis Cambridge said: "We'd like to thank everyone who has helped us to find Faith, the response has been overwhelming. We wanted to have the opportunity to say thank you and we have now been able to do that. We hope Faith and her family have a very merry Christmas.

"It melted our hearts actually, the letter arrived on Tuesday it was addressed just to the Christmas Department, at John Lewis Cambridge, and we opened it up and we found just the cutest letter from Faith.

"It was our busiest weekend of the year so far, so we had no idea it had happened.

"If she's as honest and lovely as she seems she can have a Saturday job in the future with us."

Mr Joyce had previously tweeted: "The cutest letter sent to JL Cambridge. There is no address so we wanted to thank Faith on Twitter.''