Cambridge MP Julian Huppert has launched a national agreement to tackle the damage and disruption caused by poor quality road and pavement repairs.

It's part of a new agreement to tackle damage caused by 'shoddy' roadworks.

The agreement between councils, utility companies and businesses is called "What Good Looks Like".

It's been drawn up after Julian presided over the launch of a taskforce set up in 2012 by the Local Government Association to tackle the growing problem. 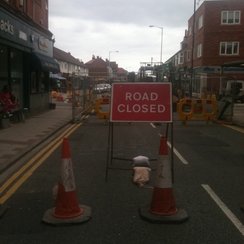 We have seen the effect lengthy road closures caused by over-running streetworks have had on Cambridge and research has shown that this is being repeated across the country.

And when the roads and pavements are not reinstated properly, this causes problems for drivers, cyclists and pedestrians.

Even a small scar in the pavement can make it extremely hard for someone in a wheelchair to get past.

The new agreement requires councils, business and utility companies to sign up to a series of promises to make sure streetworks are carried out on time and to the highest standard with minimal disruption to businesses.

This is a big step forward and it should lessen the impact these essential works have on towns and cities across the country."

The Local Government Association, of which Julian is Vice-President, represents 370 councils across England and Wales and taskforce membership also includes the National Joint Utilities Group, Transport for London, British Chambers of Commerce and the Association of Convenience Stores.

Research carried out by the taskforce showed that taxpayers face bills of around £218 million a year for making good poorly repaired surfaces after work by utility companies.

And 72 per cent of businesses surveyed said they had been affected by streetworks including suffering reduced footfall, forced closures and delivery delays.