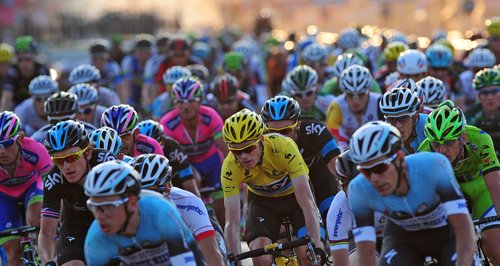 The first road closures for the Tour de France stage beginning in Cambridge have been confirmed.

The world famous cycle race will pass through Cambridge on the morning of Monday 7th July.

Two roads will close for almost 24 hours for preparation for the stage, and clean-up afterwards.

The race is now expected to begin around lunchtime.

The roads on and connected to the route in Cambridge and South Cambridgeshire, and when they will close, are detailed below:

In order to allow for the set up of the start by Parkers Piece, Gonville Place and Parkside will close on Sunday 6 July from 5.30pm.

At 4am on Monday 7 July, the following roads on the route will be closed: Regent Street, St Andrew’s Street, Sidney Street, Bridge Street, King’s Parade and Trumpington Street.

Then at 7am, Trumpington Road and the A1301 will be closed.

These road closures will remain in place until 3pm when a phased reopening will begin, with the last roads in the heart of Cambridge expected to open by 6pm.

With the roads closed, teams will get to work on preparing the route.

This includes putting in place all the necessary infrastructure and then removing it afterwards, to allowing the Tour’s publicity ''caravan'' of vehicles to begin its journey and providing for the safe movement of spectators.

Further work is now being carried out by Cambridgeshire County and City Councils and the Tour organisers to develop the plans for the roads which access the route and how they will be affected on the day.

An announcement on this work is expected later this spring.

Cambridgeshire County Councillor Mac McGuire, Deputy Leader and Cabinet Member for Highways and Infrastructure, said: "It has been said many times but hosting Stage 3 of this year’s Tour de France is going to be a day like no other for Cambridge and the county.

It will be a unique opportunity to see some of the world’s best cyclists parade then race through our region.

With such a huge sporting event coming to Cambridgeshire, there will clearly be significant impact to our road network on the day.

This is why we are now telling people about this now so residents, businesses and visitors can get ready, plan and enjoy the day.

Many have already started to make arrangements for Monday 7 July and we have been working with our partners to ensure they are aware of the impact of the race.

Over the next month, we will be working hard with organisations such as bus operators, train companies and others to ensure people can make the most of this historic day.

As we finalise these plans later this spring we will ensure information such as revised bus timetables and stops as well as wider information on the impact on access roads are published along with all the other special arrangements for the day.

There is still a lot of work to do but we are all dedicated to delivering the best start of the Tour de France we can."