£73 Million For Community Facilites In Northstowe

£73 million is going to be spent on community facilities in the new Cambridge town of Northstowe.

An agreement that will see a further £73 million investment in community facilities at the new town of Northstowe has been agreed by a joint council planning committee.

The agreement with the Homes and Communities Agency (HCA) will see millions of pounds invested to deliver facilities, including the town centre, two primary schools and over £10 million toward the secondary school being built alongside the first homes at Northstowe.

The agreement for the HCA's 3,500 home phase of the town means the agreed investment in facilities now tops £100 million with the money also being investment in a community hub with a library and health centre, sports pitches and pavilions, an indoor sports centre, open spaces, drainage and a pumping station. 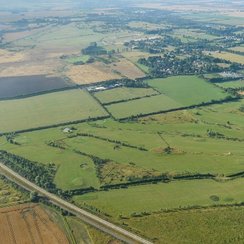 Approval of the developer agreement by councillors on the Northstowe Joint Development Control Committee follows them granting outline planning permission for the second phase of the town last month.

The town is being developed jointly by Gallagher Estates and the Government's housing and land delivery body, the HCA.

Planning permission has already been given for Gallagher's first 1,500 homes, primary school, sports hub and local centre with shops.

Work has begun on the primary school and work is underway ahead of homes being built in phase one. This will also see improvements to the B1050. The first lot of homes and primary school are due to open in September 2016.

When complete, Northstowe will have up to 10,000 new homes and an anticipated population of around 25,000 people.

Cllr Tim Wotherspoon, South Cambridgeshire District Council's Cabinet Member for Strategic Planning and Chairman of the Northstowe Joint Development Control Committee, said: "Making sure we build a true community at Northstowe is vital and lots of hard work has been carried out to prioritise where funding should be invested. The developer agreement puts a real emphasis on investment in education which I am really pleased about. Cambourne is a vibrant community with fantastic facilities, but due to the number of young families that moved in it would have been even better if the secondary school was delivered earlier. This is a lesson we have taken forward to Northstowe and the plans we have with the developers would see a secondary school delivered earlier than nearly every other development in the country. Quality at Northstowe is certainly the number one priority to make sure it is a great place to live, work and go to school."