Police are appealing for witnesses following the attempted robbery of an 82-year-old man in Peterborough, on April 5.

The incident happened at about 7pm on the cut-through between Nottingham Way and Barkston Drive, in Dogsthorpe.

Four young men, aged between 16 to 20, approached the victim and asked him for the time. As he gave them the time, they threatened to beat him up unless he handed his wallet over.

The victim took his wallet out and threw it over a fence into a neighbouring garden, at which point the suspects ran off. As they did, they barged in to him, causing cuts and severe bruising.

The young men are described as being of Asian appearance and around 5'7".

Officers are keen to speak to the people shown in the CCTV image in relation to the incident. 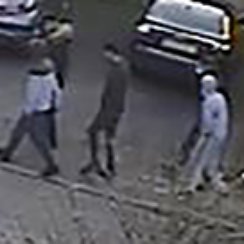 "I urge anyone with any information to come forward."

Anyone with information should call DC Wise on 101 (quoting incident number 377), or contact Crimestoppers anonymously on 0800 555 111, or online at Crimestoppers-uk.org.