We're now 3 months into the 4 year project which'll see widening and improvement works over more than 21 miles of road between Cambridge and Huntingdon.

Highways England's project manager is giving a sneak peek into progress made so far - including technical innovations and archaeological finds.

Much has been achieved since main construction on the A14 Cambridge to Huntingdon improvement scheme, Highways England's biggest scheme currently in construction, started at the end of November last year.

Chris Griffin, A14 project manager at Highways England, talks through progress so far:

"As yellow diggers have become a familiar sight along the A14 corridor in Cambridgeshire, drivers will have noticed the changes along the existing A14. But there is plenty happening that they might not have noticed."

"The narrow lanes, temporary speed limits, cones and barriers we've installed allow workers to build accesses for construction traffic and carry out vegetation clearance ahead of the bird nesting season while keeping disruption on the road to a minimum and keeping road users safe", Chris explains.

All the trees that have been cut are being used as biomass for energy production locally and more trees will be replanted when the project nears completion.

"We are committed to keeping the main roads at full capacity during the day", Chris continues, "so we only use overnight lane or carriageway closures if it is absolutely necessary, like for instance if we need to install signs or barriers, carry out pavement surveys or strengthen the carriageway where heavy machinery will need to cross on a regular basis."

"We've also installed CCTV cameras along the A14 so we can actively manage disruption to road users from a dedicated control room within the scheme's main compound. This helps us to stay aware at all times of conditions on the road and to take measures quickly if things don't go to plan."

But the most interesting activities to date are probably the ones that can't be seen from the road.

"A significant part of the scheme is a new bypass, including a viaduct over the River Great Ouse, which will run south of Huntingdon. This bypass is a brand new road so is being built away from the existing A14, with no disruption to road users other than when plant occasionally cross local roads while travelling along the new construction haul roads.

Work on this section of the project is progressing well and to schedule. Building the 750-metre long River Great Ouse viaduct, which will carry the new A14 across the flood plain and river, is a complex task. The first step has been to install a pontoon which has a 52 tonne capacity, allowing fully laden dump trucks and plant access across the river. This pontoon is allowing us to install a temporary bridge so we can start building the viaduct itself." 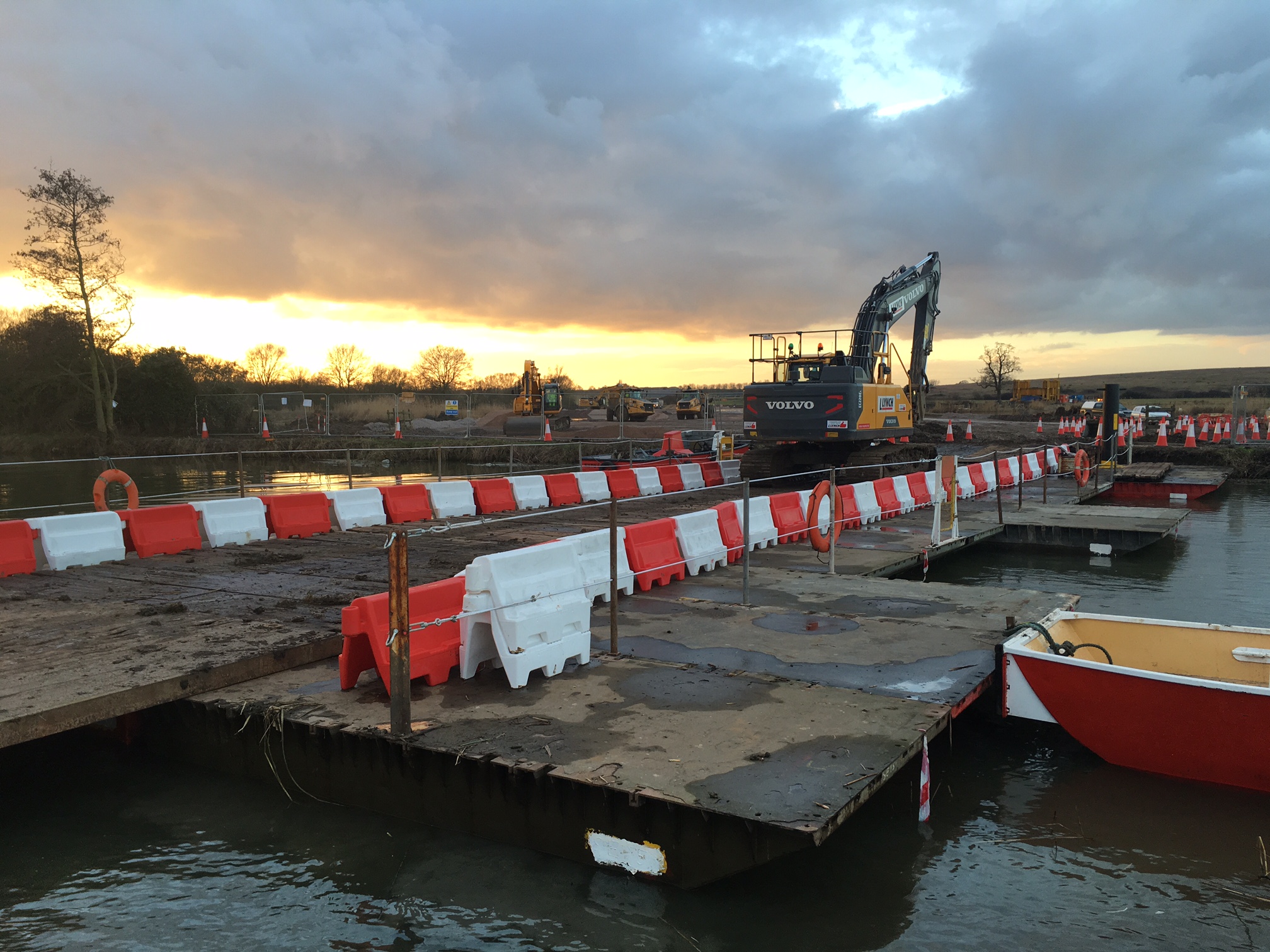 Construction of the foundations and columns for the viaduct is also under way, with plans for later this year to start installing the steelwork that supports the bridge deck and start casting the 800 concrete panels needed for the viaduct.

"We have also been building foundations for several of the new bridges", he adds.  "People may have noticed our construction teams installing giant steel cages along the A1 recently. Once these are in place, concrete will be poured around them to form the bridge foundations and we'll be able to start building the bridges themselves."

The Archaeological team has also made great progress since starting excavations last autumn following extensive surveys and trial trenching. The team identified important archaeological remains dating from the prehistoric period through to the Romano-British and medieval periods.

"The trial trenching identified some 350 hectares of land that our archaeologists would need to look at", says Chris. "Most of the remains show evidence of settlements or industrial activity, including a well-preserved series of Romano-British pottery kilns, some carving tools and even the remains of a cow."