At 2pm on Monday 22nd Feb 2016, a single-decker Stagecoach bus derailed into the Guided Busway rail between Trumpington Cutting and the Foster Road stop, throwing the driver out of his seat and injuring three passengers, who were left in severe pain.

A detailed Cambridgeshire County Council report shows the bus crossing the adjoining maintenance track, and coming to rest on the embankment on the western edge of the Busway corridor.

Roadside CCTV from the Busway shows the bus was travelling at 53.6mph, 23.6mph the speed limit going into the guided rails. 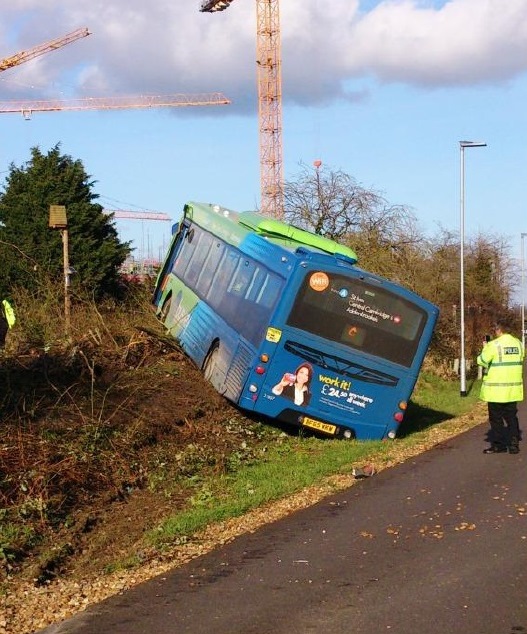 The report says it's clear at least three factors led to the derailment of the bus. The excessive speed on the approach is indicative that the driver was either inattentive or overconfident.

An approach speed of over 50 mph would leave little room for error at any junction on the Busway, less still in a transition area between a single width guideway section and a dual width one. The fact that the bus was not correctly aligned on entry into the next section of guideway indicates that the bus was not under the direct and safe control of the driver, and that it was allowed to enter the guideway in manner wholly at variance with the established operating principles.

The approach speed left no margin to correct the angle of approach, or to bring the bus safely to a halt prior to engaging with the entry flares. Once the bus had engaged with the left-hand entry flare, the angle of the flare constrained the bus’s approach to follow the line of the flare, with the result that the bus entered the concrete guideway at an angle which caused a hard impact to the offside guide wheel.

This led to the guide wheel shearing off and a loss of guidance on the bus, which was still travelling at speed. The reaction to the collision on the offside of the bus propelled the bus over to the left-hand side of the concrete guideway. The continued momentum generated by the excessive speed of the approach allowed the nearside wheels to mount the upstand and engage with the adjacent maintenance track, and carry the bus on to the maintenance track.

Once free of the constraints of the concrete guideway, the bus was free to travel in a straight line. The angle at which it landed on the maintenance track dictated its final trajectory, directing the bus along and across the track towards the verge and adjacent embankment, where the composition and gradient of the embankment finally brought the bus to a halt.

Given the speed and approach angle of the bus on entry into the guideway section, it is unlikely that the bus was under the driver’s control once it had collided with the entry flare. In any event, it would have been impossible for the driver to maintain or have regained control of the bus once the guide wheel had sheared off, and the momentum would have caused the bus to derail to either side of the guideway.

At the point where the bus collided with the left hand entry rails, CCTV footage shows the bus being jolted and the driver then looking up from the steering wheel, described as with a shocked expression. The footage also shows when the bus subsequently struck the concrete guideway, the force of the impact was sufficient to throw the driver off his seat into the foot well of the bus. Footage from other cameras inside the bus shows the passengers being dislodged from their seats by varying degrees as the derailment proceeded.

There is no evidence to indicate that any component part of the guideway or associated structures performed other than their design specifications, and the only cause for the subsequent derailment was the driver’s action, or lack of action, in the moments leading up to the collision with the left-hand entry flare.

It's recommended the Council should work with the operating companies to create an open and transparent system of scrutiny which evidences the operators’ procedures in training and monitoring of its own drivers.