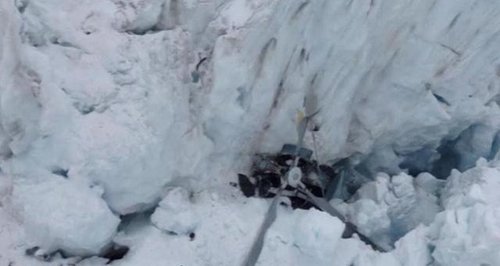 A couple from Cambridge have been named among the victims of a helicopter crash in New Zealand.

Andrew Virco, 50, and Katharine Walker, 51, were aboard the sightseeing helicopter which crashed into a crevasse on the Fox Glacier, on the country's South Island, on Saturday morning.

Another British couple - Nigel Charlton, 66, and Cynthia Charlton, 70, both from Hampshire - were also killed as well as Leang Sovannmony, 27, and Josephine Gibson, 29, both from South Australia, abd helicopter pilot Mitchell Gameren, 28, from Queenstown, New Zealand.

A Foreign Office spokesperson said: "It is with regret we can confirm the deaths, in a helicopter crash in New Zealand on November 21, of Andrew Virco and his partner Katharine Walker, from Cambridge, and Nigel Charlton and his wife Cynthia from Hampshire.

"We are providing consular assistance to their families at this difficult time.''

New Zealand Police said formal identification of the victims would take some time.

The operation to recover the victims' bodies, which has been hampered by bad weather, is under way on Fox Glacier.

A Tasman police spokeman said: "The operation is extremely challenging and the safety of those working at the scene is of paramount importance.''

He added: "Our thoughts are with the victims' families at this difficult time''.

The helicopter crashed at around 11am local time yesterday (midnight GMT), with a picture released by police showing the crumpled remains stuck at the bottom of a wall of ice close to the top of the eight-mile (13km) glacier.

Reports in New Zealand said Mr Gameren was believed to be an experienced flier.

In a statement the firm said: "Fox Heliservices' thoughts are with the families of the passengers and pilot.

"The pilot was a very valued member of our team.

"The New Zealand Police and Civil Aviation Authority have taken over the investigation.''

The Rescue Co-ordination Centre New Zealand sent four rescue helicopters to the scene, on the west coast of the island - two from Christchurch, one from Greymouth and one based locally, the latter with a cliff rescue team on board.

Police said the crash site's location meant rescuers had initially not been able to reach it. It is understood a paramedic was later winched down but found no survivors.

Inspector John Canning, the police west coast area commander, told New Zealand's One News: "It's at the top of the glacier and it is heavily crevassed, so very rough country and it is going to take a lot of care to get the people out of there.''

Alpine Adventures' website says it has been in business for around 30 years and runs "an impressive fleet of modern turbine helicopters''.

Grey district's mayor Tony Kokshoorn said weather was marginal at the time of the crash, with intermittent rain showers and low cloud. "It was not ideal for helicopter flying,'' he said.