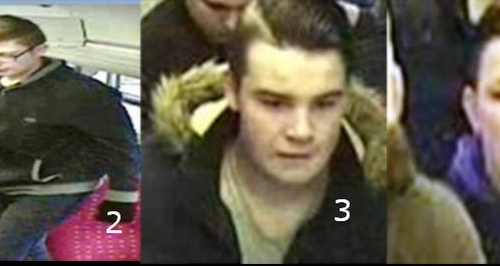 CCTV images have been released of five youths police want to speak to after a man was assaulted on a train to Peterborough.

The 22 year-old victim was punched to the floor by the group after he had challenged some members who had made inappropriate sexual comments towards them on a service from Newark.

British Transport Police said: "A 22-year-old man was punched to the floor and assaulted by a group of five youths on the train, at around 1.10pm on Saturday, 14 November 2015.

"The man, from Peterborough, was sat at a table on the train with his girlfriend when a group of approximately eight male youths boarded.

"Two members of the group sat down across from the couple and began making inappropriate sexual comments towards them both.

"As the couple got up to move seats, one of the group punched the victim and he fell to the ground where he was punched several times by other members of the group".

DC Sarah Trotter from British Transport Police said: "The victim sustained bruising to his head following the attack and has also  been left extremely shaken

"Not only was this violent and completely unprovoked behaviour of the group totally unacceptable, but the language and sexual comments they were using towards the couple were deplorable.

"We have followed a number of lines our enquiry and now are releasing CCTV images of five youths who we believe may have more information about what happened. I’d urge anyone who knows them to get in touch".