Crash On A14 Causes Massive Delays Around Cambridge

A serious crash between two lorries has caused massive delays on routes around Cambridge this morning.

It happened at 5.45am on westbound carriageway between Girton and Histon.

Two lorries were involved which then were in collision with another two lorries, so four in total.

Police say disruption is expected for some time yet.

One lorry is carrying 7.5 tonnes of teddies.

Officers also say 15 people so far have been caught filming/taking pictures of the crash site while driving past and will be prosecuted. 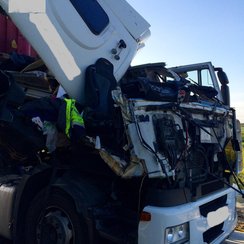 Both drivers of the lorries have been taken to hospital. Their injuries have been described as not life threatening, officers on the scene described the men as 'very lucky'.

Cambridgeshire Fire and Rescue say, "At 5.44am on Thursday (28) two crews and a rescue vehicle from Cambridge along with a crew from Huntingdon were called to a road traffic collision on the A14 westbound between junction 32 for Histon and junction 31 for Girton.

"Two HGVs were involved in the collision and firefighters used specialist cutting equipment and stabilisng equipment to rescue a casualty from one of the vehicles by 6.23am. They left the casualty in the care of the ambulance service. One other casualty was out of another vehicle on the arrival of the fire service.

"Police closed the road. Crews returned to their stations by 7.10am."

Any witnesses are being asked to call PC Ian Manley at Cambridgeshire police on 101.