Disabled Man And His Deaf Dog Attacked in Peterborough 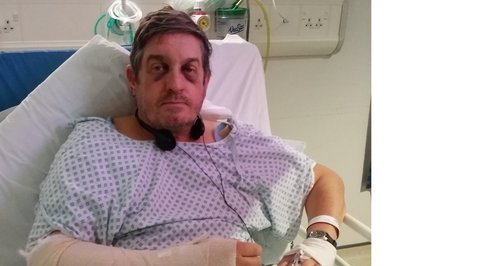 A 52 year-old-man who needs a mobility scooter to get around, has been punched and stamped on in an attack in Peterborough.

Richard was travelling along the tow path beside the River Nene on Friday when a man walking in the other direction, tripped over his deaf dog's lead.

He apologised, but was punched in the face, knocked out of his scooter, and then punched and stamped while on the ground.

The dog, a Cavalier King Charles Spaniel, was also kicked.

A passer-by called emergency services and Mr Sandon, who was in the RAF for 17 years before retiring after being shot in the leg in South America, was taken to Peterborough City Hospital.

He was treated for a broken arm, fractured ribs, bruised kidneys and has various bruises around his face and body.

The attacker, was described as wearing a peaked black beanie hat with a red, yellow and green band around it.

He was also described as black, slim, about 6'2'', in his late 20s or early 30s, and wearing a military-style green khaki three-quarter-length jacket, jeans and white, boot-type trainers.

Mr Sandon said: "I cannot understand what sort of person would attack me and my dog Blue in this way. I am a disabled man who is obviously unable to defend myself.

"Blue is deaf and wears a high-visibility coat which states this. Neither of us were a threat to this man. I hope he is caught so he cannot do this to anyone else.''