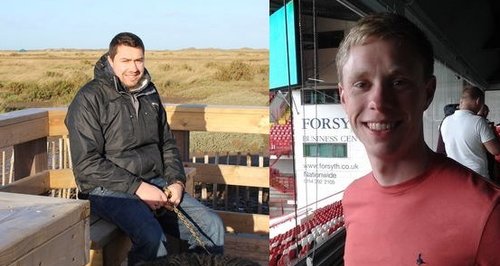 A man from Kings Lynn who killed two men in a collision near Littleport has been jailed for five years.

Mitchell Butler-Eldridge, 28, was sentenced today (Sept 30) at Cambridge Crown Court after pleading guilty to two counts of causing death by dangerous driving at a previous hearing.

He was also disqualified from driving for seven years and six months. When his ban expires he will have to undergo an extended driving test.

Mr Butler-Eldridge, of Sydney Terrace, Kings Lynn, was driving his Volkswagen Passat along the A10, Lynn Road, on February 18, 2015 when the collision happened.

At around 6.43am he attempted an overtaking manoeuvre before a bend and lost control of the car causing it to collide with an Austin Mini.

The driver of the Mini, Timothy Wildbore, 24, fromVictoria Street, Littleport, and his passenger, Andrew Thornewell, 28, from Hollendale Walk, Ely (both pictured) both died as a result of the collision.

"Butler-Eldridge made a conscious decision to overtake a vehicle when it was clearly dangerous to do so and this resulted in the tragic loss of life. This incident was clearly avoidable had he thought about his actions and I welcome the sentence passed. All too often do we see people performing unsafe overtakes and it is by some fortune that these incidents aren’t more frequent.  I urge people to consider their actions when driving/riding and to reacquaint themselves with the Highway Code.

One bad driving decision and a dangerous manoeuvre has robbed two families of loved ones and this sentence should serve as a deterrent to people whose standard of driving falls below what we, as society, expect."

Mr Timothy Wildbore, 24, lived with his girlfriend of seven years in Victoria Street, Littleport. He attended Herschel Grammar School before completing his bachelor's degree in mechanical engineering at the University of Nottingham.

He was a project design engineer and worked at R J Herbert Engineering Ltd in Marshland St James, near Wisbech, and had just completed a project at Stanstead Airport.

He loved sailing and rowing and was committed to coaching at the Isle of Ely Rowing Club where he was regarded as an inspirational junior coach. Tim's family donated his boat to the juniors at the club and it has since been named in his memory.

Also in his spare time he used his engineering skills to restore classic cars.

His girlfriend, who wishes to remain anonymous, said: "Tim is loved and missed every day."

In a statement, Andrew's father Paul Thornewell said: "Andrew relocated to Cambridgeshire to be with his fiancé and to further his career. He was an award winning undergraduate at Sheffield Hallam University achieving a first class honours and the Sheffield Hallam award in Design Engineering.

"As a Project Design Engineer for R J Herbert Engineering Ltd, he had also just completed a project alongside Tim at Stansted Airport.

"He had a passion for life and was a keen supporter of Gillingham Football Club.

"Andrew was a huge part of our family, a loving, wonderful son, brother and fiancé.  This tragic event has shattered and devastated not only our lives but that of our extended families, close friends and colleagues.

"He gave us 28 wonderful and happy years and words cannot express how we all miss him.

"Nothing will ever bring him back and no amount of justice will ever be enough but we hope that lessons will be learned to inform other road users that poor decision making can cause and have catastrophic consequences.

"Our heartfelt thoughts are also with Tim's family and his partner."