Thames Valley Police have arrested a second man in connection with the murder of Adrian Greenwood in Oxford, a man in Peterborough.

Police officers were called to an address in Oxford on Thursday afternoon, after a man was found inside the hallway of the property.

The ambulance service was also called and the man was pronounced dead at the scene.

Formal identification is scheduled to take place this afternoon (11th), but we are satisfied that the man is Adrian Greenwood, 42, of Oxford.

Just before 11pm yesterday (Sunday 10th), a 50 year-old-man from Peterborough was arrested on suspicion of the murder of Adrian Greenwood.

Another man was arrested on Thursday night (7/4) on suspicion of the murder of Adrian Greenwood. He was released without charge on Saturday (9/4).

"We continue to urge for the public’s help to find out what happened to Adrian Greenwood (pictured). It’s crucial that anyone with any information about Mr Greenwood’s background or the murder comes forward as soon as possible.

The investigation team would like to hear from anyone who has details about Mr Greenwood’s associates, or anyone or has had a personal or business engagement with him in the last few weeks.

I would like to thank all those members of the public who have already come forward with information. A number of lines of enquiry are being pursued.

We are re-releasing a CCTV image of the last sighting of Mr Greenwood, which was at Sainsbury’s supermarket in Oxford Road, Kidlington, at about 6pm on Tuesday 5th April. If you saw him after this time we would also like to hear from you. 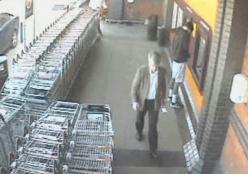 Finally, if you saw or heard anything unusual in the vicinity of 25 Iffley Road, between about 4pm on Tuesday (5/4) and about 3pm on Thursday (7/4), please come forward.

If you have any information, no matter how insignificant you think it might be, please call us via 101 and quote reference number 582 (9/4).

If you do not want to speak directly to the police you can contact the independent charity Crimestoppers anonymously on 0800 555 111. No personal details are taken, information is not traced or recorded and you will not go to court.

I would like to reassure the public that we are conducting a thorough investigation into this vicious murder. We have had specialist search teams at the scene, including a police dog. Further, we have also undertaken house to house enquiries, forensic work at the scene and are reviewing CCTV.

A cordon will remain in place at the scene and we will continue to carry out work there today (11/4).

Our condolences and thoughts are with Mr Greenwood’s family at this difficult time."