A Saturday night trip to a local fish and chip shop two weeks ago proved to be life changing for a couple from near Peterborough when they bought what became that night’s winning Lotto jackpot ticket.

The pair later learnt they had scooped a staggering £32,534,188 – the second biggest prize in Lotto’s history.

Gerry Cannings, 63 & Lisa Cannings, 48, were visiting a relative near Slough when they decided to opt for a Fish ‘n Chip dinner on Saturday night rather than cooking. Gerry popped to the local fish and chip shop in Datchet to get their favourite order of Cod, Plaice, Chicken Nuggets and chips when he spotted a National Lottery poster announcing the big rollover Lotto jackpot. On the spur of the moment, Gerry bought five Lucky Dips for that night’s draw and returned back to his father’s house to enjoy their dinner.

Gerry explained what happened next:

"Dad does Lotto as well, plays the same numbers all the time and had a ticket that night too. So at about 10pm, Dad suggested we check the winning numbers. But we couldn’t find them on teletext so went to bed.  Sunday morning came and I decided to check the internet.

I started looking down the lines I had and then saw that the first line was the same as the one on the screen. Next I saw there was only one winner and then it hit me ‘Bloody hell we’ve got the whole lot!’  I double checked it, reading it forwards and backwards. It just didn’t seem real but it looked right.

I went and found Dad but it was obvious he didn’t believe me. I then went back upstairs to tell Lisa and said ‘What would you say if we won the jackpot?’ She can tell if I’m lying by looking into my eyes so she knew immediately I was being serious." 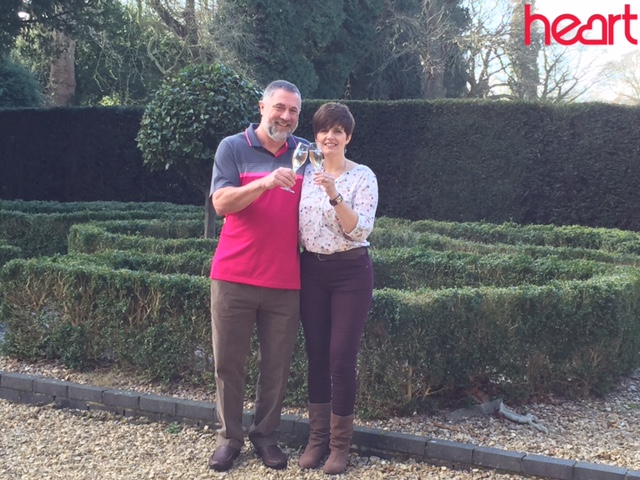 "It was only when our 11 year old son read out the winning numbers on TV and they matched did Dad finally believe me. Our son asked what it meant, I just said ‘Daddy’s won an awful lot of money!’."

However although the couple called Camelot to get the win confirmed that day, the pair amazingly didn’t arrange to get the ticket validated for nearly a week!

Lisa explains: "I know it sounds mad but we had a guy in to paint the whole house. We’d been planning it for ages and had packed everything into boxes. We just thought it would be easier to wait, although it did mean that Gerry had to carry round the winning ticket in his wallet all week!  It was very nerve-wracking!"

Gerry, a retired school teacher, has always dreamt how he would spend a lottery win, not actually believing that it would come true! Now they hope to help their families.

In addition to assisting their children and grandchildren financially, the couple are on the lookout for a larger home big enough to sleep all the family at the Christmas.

Gerry, a keen golfer, is also after a car wide enough to take his golf clubs as the current one lets him down on that score! Otherwise the couple plan to enjoy their travels. Top of the list is New Zealand as the family are keen Lord of the Rings fans and would love to visit the country where it was filmed.

Gerry says: "We can go where we want – and travel First Class too.  After looking after the family, what this money brings is a chance to enjoy new experiences and see places we thought we wouldn’t get to see."

Lisa, who also works as a teacher, and Gerry have been married for 13 years and have three children and five grandchildren between them.

The couple’s win places them second in the Lotto rich list, just behind last month’s biggest ever Lotto winners, David & Carol Martin, and one other anonymous ticket holder, who both scooped a £33,035,323 jackpot prize each in the draw on 9 January.

Gerry and Lisa are among the 88 ticket-holders who have scooped £1 million or more since October.  This includes jackpot winners and the guaranteed millionaires made by Lotto Millionaire Raffle in each and every draw.

COVID-19: Self-isolation period in England cut to five days as 16 and 17-year-olds invited for booster jabs