The football club say he passed away yesterday, aged 64, following a battle with dementia.

He returned to manage Posh in January 1991 and promptly led the team to back-to-back promotions and a place in the second tier of English football for the first time in the club's history.

He went onto to become chairman and then owner of the football club. Tributes have been pouring in on social media with Gary Kimble, who scored the winner for Turner's men in a famous cup success at Liverpool tweeting: 'R.I.P Chris Turner, hope I made you proud that night against Liverpool winning 1-0 #GodBless 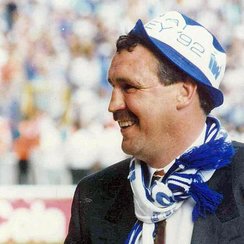 Peterborough United club historian Peter Lane has paid tribute too, saying, "It is with deep regret that we learn of the passing of a true Posh Legend, Chris Turner, who sadly passed away on the evening of Monday 27th April 2015 aged 64 years.

"There are many legends in the history of Peterborough United, but surely the legend of all legends would have to be that of Chris Turner.

"I wonder how many (if any) persons in the game started from an apprentice player – boot cleaner – signed full time – became Captain - then Manager - joint owner of the Club – Chairman – Manager again – Chief Executive – Coach and Sales Manager! Well Chris achieved all of these positions, which is what made him so unique.

"I remember how he lead his defence in great style during that Championship Season of 1973/74, winning the Fourth Division Title.

"Later as Manager Chris lead Posh to promotion in 1990/91 having only been in the Managerial post barely three months.  Then the following season Chris achieved promotion again by proudly leading his team out to victory at the Twin Towers of Wembley against Stockport County 2-1, taking us to the then renamed Division 1; [1991/92].  Chris became the first Manager in Posh's history to take us into our highest ever league position with back to back promotions.

"In December 1992 Chris headed a consortium to own the Club, of which he then became Chairman.  Chris also took over team affairs once again during season 1993/94 following the resignation of Lil Fuccillo.

"Chris was a great leader both on and off the field, he was one of the best centre-back's to appear for Posh.  A Manager who lead us to unbelievable heights. A big man with a big heart, always a pleasure to watch.  God Bless you Chris and R.I.P."