A pilot from Stamford, who was due to be flying the Hawker Hunter jet which crashed at the Shoreham Airshow says he's been left "horrified'' by the tragedy.

Retired RAF Squadron Leader Chris Heames was originally listed in the programme as flying the 1950s plane at the West Sussex show.

But a family holiday meant his place was taken up by ex-RAF and British Airways pilot Andy Hill.

Mr Heames returned from a three-week trip to Cambodia to his home in Stamford, on Monday morning.

He said of the accident: ``I was horrified, the same as everyone else. Anyone who has seen it knows it's a terrible tragic accident, anyone would react the same way.'' 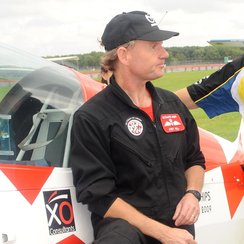 He found out about the accident when friends contacted him thinking he was flying the plane.

The 62-year-old said: ``There's a bit of a misrepresentation that Andy was a last minute stand-in for me. That's just wrong. I haven't worked out why my name was in the programme yet.

``My holiday was booked four months ago and we were always going to Cambodia for three weeks at the start of August. He was always going to be flying on the display and is as equally qualified and experienced as I am.''

Mr Heames, 62, joined the RAF after leaving school in 1970 and has approximately 13,500 total flying hours.

He said: ``It would be totally wrong to try and second guess the cause of the accident. The Air Accident Investigation Branch are the experts in dissecting an accident and sorting out the ways of avoiding future accidents, we have to wait until they produce a report.''