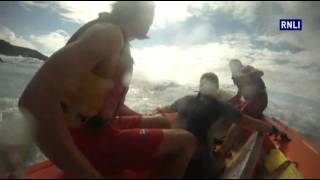 Perranporth RNLI lifeguards have rescued twin sisters after they got caught in a strong rip current as they were bodyboarding at the beach.

Holidaymakers Joanna and Rebecca Teagle had been in the water for almost an hour when a strong rip current pulled them out of their depth on their boards just after 5pm. In two-metre high waves and an onshore wind, the 22-year-old girls struggled to get back to the shore.

Joanna said: "The current was so strong we just got carried out. We couldn’t touch the bottom. It happened in a few minutes. We just couldn’t believe we had gone out so far and couldn’t get in. There were three of us so we didn’t panic, but it was a bit scary."

RNLI lifeguard Chris said: "Perranporth frequently experiences strong rip currents which can take anyone out of their depth very quickly. The girls did the right thing by staying calm. We would remind anyone coming to the beach to swim or bodyboard to stay between the red and yellow flags where lifeguards can monitor you. If you are caught in a rip current, keep calm, raise your hand and shout loudly for one of the lifeguards to assist you."

The RNLI’s Respect the Water campaign is running throughout the summer. To find out more about the dangers of the coast and how to stay safe, visit www.rnli.org/respectthewater or search #RespectTheWater on social media.