'Lucky' Escape For Couple In Cornwall 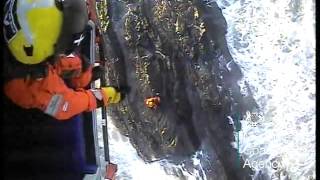 The coastguard has released dramatic footage of the moment two people were rescued after getting cut off by the tide.

The "lucky'' couple were left trying to cling to rocks at Crackington Haven, between Port Isaac and Bude on Cornwall's north coast, as waves crashed around them.

One of those stranded was washed into the sea as rescue teams swooped.

Crews from the Bude Coastguard Rescue Team and the Bude RNLI lifeboat helped winch the two to safety shortly after 3.30pm on Thursday, after the couple's friends raised the alarm.

Coastguard spokesman James Instance said: "These two people were very lucky. They were in a precarious position and the force of the waves actually knocked one of them off the rocks and into the water.

"Their friends did the right thing by calling the UK coastguard when they realised they had got into trouble.''