The three lions are causing quite a stir among half term visitors at Newquay Zoo this week.

The arrival of two new lions have joined Amahle the lioness, after Samson, the previous male was rehomed at Dartmoor Zoo.

The new lions aren't just any lions they are Amahle's brother and sister, Boss and Semira.

Amahle was delighted to see them and hasn't left her sister?s side since.

This is the first time Newquay Zoo have ever housed three lions but the decision was made after careful consultation with Longleat Safari Park that it would be best to bring the family group back together as the cats would be much happier together. They are now an extremely well bonded pride.

Staff at the Zoo say it was an emotional moment for all involved reuniting the family back together and further updates on their progress will follow over the coming months.

John Meek says "It's the first time we've ever had three lions here, but it's working fantastically well"

"You see them rolling around like kittens now... and it's just wonderful to watch. it's just the best thing we've done with Lions at Newquay". 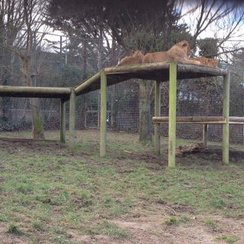 It is thought that there is less than 30,000 African Lions left in the wild. That's a decline of over 80 percent of their historic range and currently they only exist in 28 countries in Africa and one country in Asia (India) where they are critically endangered with less than 400 left in the Gir Forest.