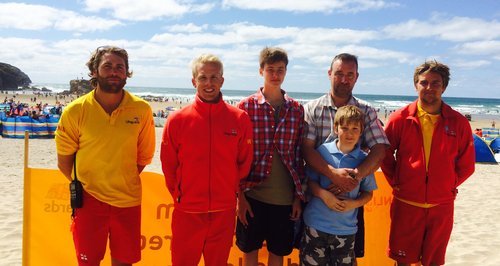 Lifeguards patrolling Perranporth beach are urging people to swim between the red and yellow flags after rescuing a father and his two sons from a rip current earlier today (Thursday 30 July).

The family of three fell off a sand bank around 250 metres outside the flagged area where a strong rip current quickly dragged them out to sea.

In force four north westerly winds and messy sea conditions, the family struggled to keep their heads above the water.

RNLI lifeguard James Kirton spotted them from the lifeguard patrol truck and immediately responded to the incident on a rescue board, as well as contacting other lifeguards for further assistance.

As James reached the scene he found the father, Jason Dixon, struggling to hold his distressed 11-year-old son out of the water. He was able to get the boy on the rescue board while Jason held on to the side as it was paddled back to the beach.

Lifeguards Sam Chamberlain and George Hudson both paddled more than 200m from the bathing area to assist in the rescue and took the second son, a 14-year-old boy, back to the shore.

The family were shaken up but did not need any medical assistance. Jason said:

"We were only in the water five minutes and the next thing we knew we were in trouble. It happened so quickly. It was unbelievably scary. We were lucky the lifeguards were there within two minutes. I can’t thank them enough."

"The area the family went in has one of the strongest rip currents on the beach, which can take bathers out of their depth very quickly. We advise everyone to stay between the red and yellow flags when swimming at a lifeguarded beach.

We’re on patrol daily and are able to respond to the sea conditions and move the flagged bathing areas accordingly to keep people safe. Don’t be afraid to talk to us for advice as we can show you how to avoid currents and how best to stay safe."

The RNLI advises that if you’re caught in a rip current, to:

Stay calm – don’t panic
If you can stand, wade. Don’t try to swim
If you have an inflatable or board, keep hold of it to help you float
Raise your hand and shout for help loudly
Don’t swim directly against the rip or you’ll get exhausted
Swim parallel to the beach until free of the rip, then make for shore

The RNLI’s Respect the Water campaign is running throughout the summer. To find out more about the dangers of the coast and how to stay safe, visit www.rnli.org/respectthewater