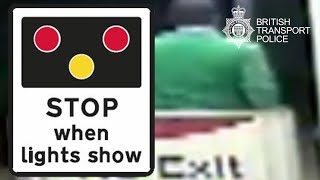 British Transport Police have released footage showing the moment a man decided to take a short cut over a level crossing at Truro station as a train was approaching.

The man, who was identified after an appeal, has been issued with a caution after the incident on Saturday, 20 December.

In the video, the man can be seen making his way down the station stairs to the exit and instead of leaving the station with everyone else, he jumps onto the tracks and head for the level crossing

Fortunately an eagle-eyed member of staff spotted the man and flagged down an oncoming train.

The footage has released as part of a week of action at level crossings.