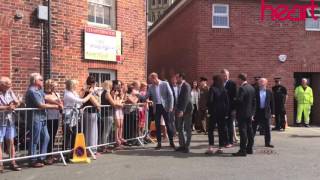 The Royal Couple visited charities and greeted thousands of well-wishers in Cornwall.

The Duke and Duchess of Cambridge were met with hundreds of supporters as they visited Truro Cathedral.

The Royal couple signed a slate for the Cathedral's multimillion pound roof appeal, leaving their mark on one of the 60,000 new tiles being used to re-slate the roof.

Children with posies greeted Kate in the bright summer sunshine, as she emerged in a pale pink Lela Rose dress with wedged sandals.

William was smart casual in a jacket and trousers, and shirt without a tie, as they made their way to Zebs - part of Young People Cornwall - a charity for youngsters aged between 11 and 25.

There they spoke to teenagers about the help ans support they recieve at the youth centre, and were talked through several mental health projects, including photography and gardening.

As they watched a group taking part in a workshop, Kate asked "Do any of you know what you would love to be? Do you have some aspirations?''

William cut in saying "t is totally cool not to have that, by the way. It took me an awfully long time to work out what I wanted to be.''

The Duchess added "It is so difficult because there's so much out there. It is hard, isn't it, to pinpoint one thing? William is right. I found it difficult as well.''

Tamara Crowe, from Truro was part of the group, and said she found their comments reassuring "They just sounded very interested in everything. They do genuinely want to know what it is like.''

William and Kate were then treated to a performance by 16 year old Ellie Kiraly from Porthtowan, who sung Stay With Me by Sam Smith.

Prince William was then offered a go on the drum kit, but he declined joking that he knew his strengths lie "and it's definitely not at a drum set".

Later the Duchess tried her hand at pulling a pint at Healeys Cornish Cider Farm.

After visiting housing projects Nansledan and Tregunnel Hill, the pair ended their day on Town Beach in Newquay.

They met children and their mentors from the Wave Project - a charity which uses surfing to reduce anxiety and improve wellbeing in children.

Their next stop is the Isles of Scilly tomorrow  (2nd September 2016).