Surrey Fire and Rescue have started an investigation after a large fire started overnight at Redhill Aerodrome.

It was first spotted by the pilot on the air ambulance which was coming into land. No one was on site at the time.

The fire service was called and crews quickly brought it under control and contained the spread. At its height there were eight pumps, two aerials and two water carriers. No damage was caused to other property. 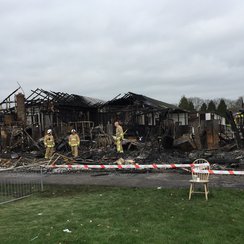 The aerodrome has released the following statement:

"In the early hours this morning (Monday 13 April) a fire broke out if the Old Main Block at Redhill Aerodrome. No one was on site at the time. The fire was spotted by the Kent Surrey Sussex Air Ambulance as it came in to land. Surrey Fire and Rescue were alerted and a Critical Incident declared. The fire was quickly brought under control and no damage was caused to other property.

"Unfortunately the Old Main Block is totally destroyed. Redhill Aerodrome Limited is working with both the aviation and non-aviation tenants to provide temporary accommodation and assist them in keeping their businesses running. The Chef on the Road Cafe is closed until further notice.

"Surrey Fire and Rescue personnel remain on site and are carrying out an investigation however at this stage there is nothing to indicate that the fire is suspicious."