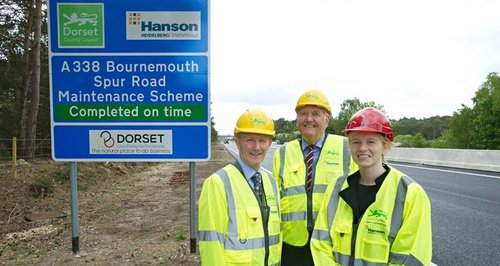 £22 million, nine month works to improve safety and prevent flooding on Bournemouth's Spur Road will end this weekend, on schedule.

The busy A338 has had lane closures and speed restrictions since September, causing huge frustration for drivers.

The stretch between Ashley Heath and Blackwater has now been completely rebuilt. Dorset County Council says all four lanes will be fully open from 6am on Saturday, in time for the Bank Holiday Weekend.

The rebuild of the A338 has been funded through the Dorset Growth Deal and marks the end of the first of Bournemouth International Growth Programme's transport and infrastructure projects aimed at unlocking suppressed growth around Bournemouth Airport and boosting the local economy. Dorset County Council says it's delivered the project on time and on budget.

The stretch of the A338 Bournemouth Spur Road between Ashley Heath and Blackwater has been completely rebuilt and now has:
- A new lower noise surface layer
- 1 metre hard strip for emergency use
- Improved drainage to reduce flooding and ponding
- New concrete central reserve safety barrier to reduce maintenance and likelihood of crossover accidents
- New road signs, cats' eyes and road markings

As part of the reconstruction, 70,000 tonnes of material from the old road has been recycled, making the scheme one of the greenest road maintenance projects in the country. Producing the material at the site compound has also reduced carbon emissions by 582 tonnes compared with transporting the material from a quarry.

The project has also been innovative in its approach to removing reptiles - protected by UK and European law - from the area. Organisations must usually apply for a licence from Natural England before beginning lengthy work to install reptile fencing and move the creatures by hand.

For the A338, which goes through multiple areas of protected heathland, ecologists at Dorset County Council worked closely with Natural England to agree a new method of working - making the verges unattractive as habitat while enhancing other areas nearby to encourage the reptiles to move home.

"We're delighted that the major investment in the A338, an economy-boosting infrastructure project, has been completed on schedule. Our road networks drive Dorset's economy and play a crucial role in supporting jobs and growth.

"Dorset Local Enterprise Partnership was successful in a competitive bid to secure £22 million through the Dorset Growth Deal to ensure the future viability of the A338, the key link road to Bournemouth Airport, one of our county's prime business assets. The new improved major trunk road means more reliable journey times, and improved road user safety for years to come."

"The reconstruction of the Spur Road was long overdue and I'm pleased Dorset Highways have been able to work with our partners Hanson Contracting UK and WSP Parsons Brinckerhoff to make it one of the greenest road maintenance projects in the country. Not only is the recycling rate exceptional, but we have enhanced twenty-three hectares of nearby heathland and created new habitat for reptiles.

"These last nine months have felt like a lifetime for drivers and businesses, I'd like to thank you for your patience."

Engineers will be monitoring the new road over the coming weeks and two weeks of night closures are provisionally booked at the end of June for any additional completion works.