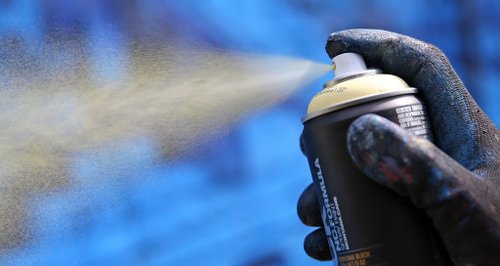 A teenage vandal has been banned from carrying paint spray cans in England and Wales after admitting a string of graffiti tagging offences.

Jason West travelled to Bristol from his home in Bournemouth to spray his distinctive ``wash'' tag on buildings across the city.

The 18-year-old pleaded guilty to 78 counts of criminal damage and was sentenced to eight weeks' imprisonment, suspended for 12 months, by a judge at Bristol Crown Court yesterday.

He received an 18-month Criminal Behaviour Order banning him from being in possession of any paint spray cans for whatever purpose in England and Wales.

West was also required to observe a two month curfew between 9pm and 5am, pay nearly £2,000 in compensation to victims and complete 120 hours' unpaid work.

Pc Stuart King said: ``West travelled to Bristol with the sole intention of causing damage to private and public property by painting it with his distinctive 'wash' tag.

``This is the latest in a series of arrests as part of a wider joint crackdown with Bristol City Council targeting prolific graffiti writers in the city.

``We are not targeting graffiti as an art form but instead aim to deal with those that commit a criminal act by damaging property without the consent of the owner.

``All of those that have so far been arrested or identified are adults - many of whom are in employment or university and are actively putting their graffiti tags in as many prominent locations as possible.''

Councillor Daniella Radice, assistant mayor for neighbourhoods at Bristol City Council, added: ``This is a great example of our partnership approach.

``We are working to tackle the tagging that blights many city streets and transport corridors, and is of concern to many people.

``We are pleased that the court has supported the work we are doing to combat this issue by handing down a strong sentence.

``We hope this will make other people think twice before mindlessly tagging properties across our city.

``Bristol City Council is currently working on a new policy, which aims to make it clear exactly what constitutes graffiti.

``As a cultural capital, we support street art where the owner of the building has given permission but we are keen to see the end to senseless tagging across the city.''