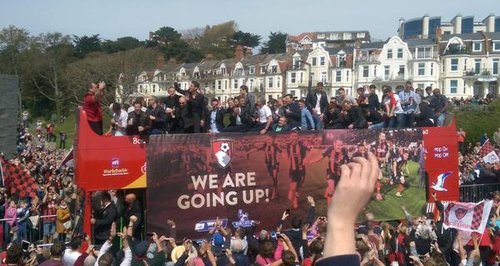 Almost 60,000 people turned out along Bournemouth seafront to celebrate the football team's promotion to the Premier League as Championship winners.

They gathered near the town's two piers and all along the seafront route, cheering and waving as the players, manager and coaching staff and chairman paraded between Boscombe and Bournemouth Pier yesterday morning (Monday 4 May).

The two buses were greeted with huge cheers, the blowing of horns and waving of flags and scarves - on a sunny Bank Holiday Monday.

The team showed off the trophy and sprayed champagne over the delighted crowd.

It was only six years ago that the club was facing the prospect of dropping out of league football altogether - but at the weekend they won the Championship title.

Captain Tommy Elphick tweeted 'What a great day thank you all for coming!', midfielder Charlie Daniels said 'overwhelmed by the turnout today' while chairman Jeff Mostyn posted 'wow you were sensational the lads were inspired by you'. 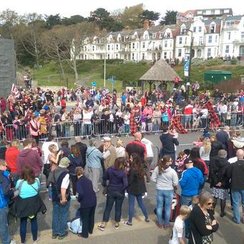 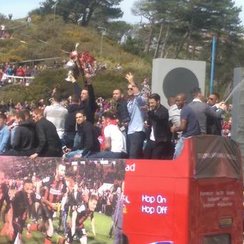