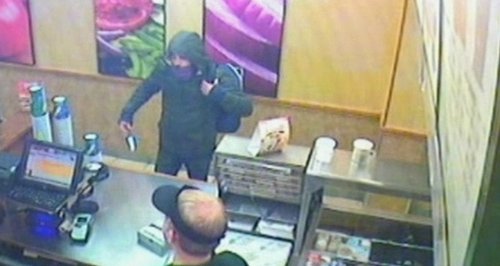 Police are hunting an armed robber who threatened a worker at a branch of Subway in Bournemouth.

At 12.07am on Friday 9 January 2015, a man entered the Subway takeaway on Wimborne Road in Winton, opposite the junction of Wycliffe Road.

The offender threatened a male member of staff with a knife before demanding cash from the till. He made off with an undisclosed amount of cash.

He is described as white, around five feet six inches tall, had his face covered with a scarf and hood and was carrying a blue rucksack.

“This was a frightening ordeal for the member of staff who was thankfully uninjured.

“From our enquiries we believe the suspect left the shop, turned right and then right again into Withermoor Road.

“I am appealing for anyone who recognises the suspect or saw someone similar to the man pictured in the area at the time to please contact Dorset Police on 101.

“All calls will be dealt with in strict confidence.”