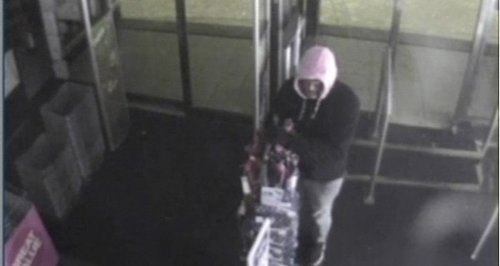 Police are looking for a burglar who's raided the same Bournemouth store twice in two days.

Superdrug in Commercial Road was broken into in the early hours of Monday and again early yesterday.

The most recent happened at around 1.25am on Wednesday (29 October) when a man forced entry to the front of the shop and, using shopping baskets, stole a large quantity of perfume and men's aftershave.

The suspect was seen to leave the store carrying items in baskets and head towards Orchard Street. He is described as white and of slim to medium build. He was wearing slim fitting grey jeans, black trainers with white on the bottom and a black jacket with a bright pink hooded top underneath with the hood up.

"The suspect was stood outside the store before he gained entry and we know from CCTV footage that a number of people were in the area at the time. I urge anyone who witnessed this incident or saw a man matching this description to get in contact."

The Superdrug store was also targeted on Monday 27 October between 3.42am and 5am. A large quantity of perfume and aftershave was taken.

The offender in this incident was described as white, of slim to medium build, with short dark hair and a stubble beard. He was wearing a dark jacket, dark jeans and black trainers with white on the bottom.

"We believe the same man is responsible for both burglaries and we would urge anyone who recognises the man in the CCTV footage to call Dorset Police in confidence."

Witnesses and anyone with information should call Dorset Police in confidence on 101 quoting incident number 29:60. Alternatively, call the free and anonymous Crimestoppers line on 0800 555 111 where mobile phone tariffs may apply.