Children Pay Tribute To Their Mum After Fatal Dorset Crash 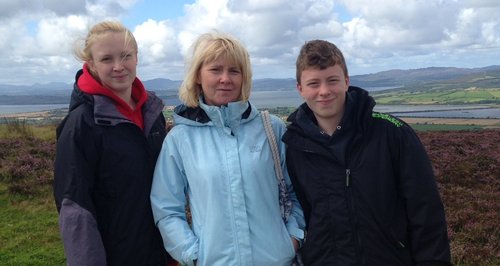 The children of a woman who tragically died in a collision near Wimborne have paid tribute to her.

At around 4.13pm on Wednesday 10 June 2015 a two vehicle head-on collision between a black BMW 3 Series and a blue Ford Fiesta took place on the A31 between the Lake Gates and Merley Bird roundabouts.

Sadly, 49-year-old Tereasa Cutler of Ringwood - who was driving the Fiesta - died at the scene.

Tereasa's children, 18-year-old Alice Cutler and 16-year-old Dan Cutler, and her nephew 19-year-old Joe Woodland, of Alderholt, were seriously injured and spent many weeks receiving specialist treatment in hospitals in Poole and Southampton.

Two men who were travelling in the BMW were taken to Poole Hospital for treatment.

Alice, speaking on behalf of the family, said: "When an accident of such magnitude happens to you, it really does change your life.

"As well as our physical injuries from such a horrific crash, we lost the most beautiful, kind and caring mother we could ever have wished to have.

"Tereasa was incredibly selfless putting everyone else before herself. Her dedication to her volunteer work for Ringwood Football Club as their welfare officer shows how much she cared for others and always went out of her way to help in whatever way she could, despite having a fulltime job herself.

"Having lost our Dad in 2006 to cancer, Tereasa took up the role of both Mum and Dad to myself and Daniel which she did with such continuity and success; always once again putting her children before herself.

"She also took Joe in when his mother, Tereasa's sister, passed in May this year; providing a home and support network to Joe during this horrific time.

"Tereasa was beautiful, smiley, happy and radiant. She lit up a room when she entered with her happy and hard-working personality. To know that she passed in such a horrific way is something that both Daniel and I will always struggle to come to terms with.

"Daniel, Joe and I have all now been discharged from hospital and are recovering in the privacy and peace of our new homes. Recovering from such a large accident will be a long and delicate process, but we are all making good progress.

"We would like to thank firstly the air ambulance teams for working so diligently to transport both Daniel and Joe to hospital with such care and attentiveness.

"Our thanks also go to the fire service for working so efficiently and with such care when removing both Daniel and Joe from the car.

"One of our biggest thank you, however, goes to the staff at both Poole and Southampton hospitals. You were all incredible in both your clinical and emotional support during this extremely challenging time. You were all kind, supportive, compassionate and attentive and for that we owe you greatly.

"Finally, we would like to thank the police for their initial and continued support, in particular our lovely police liaison officer who has provided guidance and support in the minefield that an accident like this can be.

"We thank everyone for their kind wishes and support during this extremely difficult time and look forward to a continued recovery towards our new future.

"In Mum's memory we have been collecting for the Dorset and Somerset Air Ambulance. Donations can be made at www.justgiving.com/Tereasa-Cutler."

Inspector Matt Butler, of Dorset Police's Traffic Unit, said: "We have been investigating the circumstances of the collision and I would like to renew our appeal for anyone who saw either vehicle prior to or at the time of the collision to please contact us on 101."