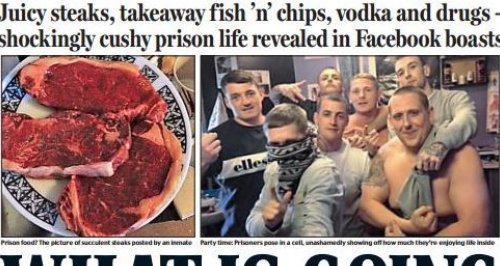 An investigation's underway after photos emerged of inmates showing off steaks and takeaways, smuggled into a Dorset prison.

The pictures - also appearing to show prisoners taking drugs - were taken on a mobile phone, also smuggled into HMP Guys Marsh near Shaftesbury.

A Prison Service spokesperson's called the behaviour "unacceptable" - and say it's been referred to police.

The images emerged in a turbulent week for the Ministry of Justice after it was forced to obtain a High Court injunction to order staff back to work after a mass walkout over health and safety fears.

A Prison Service spokesperson said of the images:

``This behaviour is unacceptable. We will be referring this matter to the police for investigation and have had the social media profiles removed.

``We are stepping up measures to find and block mobile phones in prisons and those found with them face extra time behind bars.''

It is believed that four of the six prisoners who were pictured in the social media posts have been moved to other prisons.

In the HM Inspectorate of Prisons' latest report, inspectors said staff had ``all but lost control'' of the Category C jail.