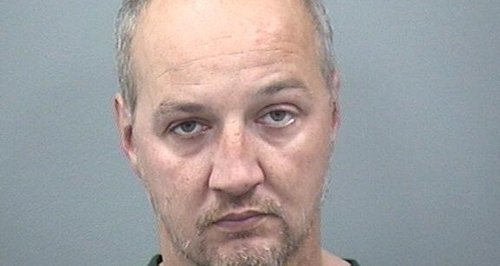 A failed bank robber from Bournemouth's been jailed for three years - after being caught by police who found him covered in red dye.

Russell Gordon Napier told staff at the NatWest on Christchurch Road in Boscombe he had a bomb and stole cash last month.

Minutes later a security dye pack in the money went off - officers found him sitting on a kerb nearby with the money stuffed up his T-shirt.

The court heard that at 4.30pm on Monday 15 June 2015 Napier went into NatWest Bank on Christchurch Road in the Boscombe area, approached the till and said "I've got a bomb under here, give me money."

Napier repeated the threat several times and gestured to his stomach area. He then demanded the cashier place cash in a white plastic bag. The cashier did so but also placed a security dye pack amongst the cash.

Napier fled the scene with a substantial quantity of cash but a short time later the dye pack activated covering the defendant and cash in red dye. This caused Napier to drop some of the cash in a nearby supermarket.

Officers attended the scene and, following a search of the area, found Napier sat on the kerb in a car park on Hawkwood Road with red dye on his face and hands. When Napier was asked to stand up a large quantity of cash fell from his T-shirt.

"Napier's actions that day caused great upset to the staff working in the bank at the time and members of the public. I would like to praise the quick-thinking cashier for putting the security dye pack in the bag which undoubtedly led to him being caught and convicted.

"I hope this sentence sends out a very strong message that anyone convicted of robbery will be caught and treated robustly by the courts."