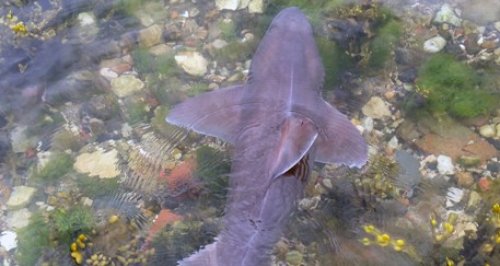 A pregnant four-foot-long smoothound shark has been rescued from a storm drain at Portland by marine experts from Weymouth Sea Life Park.

The shark had swum into the drain at Chesil Beach at high tide and found itself trapped when the tide receded on Monday morning (June 10th).

Coastguard officers were alerted to its presence when they spotted people trying to catch it with a line and hook baited with a mackerel head.

"He warned them off and then called for our help," said senior aquarist Jean-Denis Hibbitt, from the Sea Life displays development department in Weymouth.

Jean-Denis and colleague Anna Russell raced to the scene and waded chest deep to catch the shark and - after checking it was okay - release it back into the sea.

"It was heavily pregnant female, probably due to give birth very soon," said Jean-Denis.

He added that many native British sharks would be close inshore at this time of year and many would be pregnant females like this one.

He and Anna were horrified to learn someone had been trying to hook the shark, which he said had suffered minor damage to a fin as a result.

The shark swam away to deeper waters where it could soon produce anything between four and 15 off-spring.

"We would naturally urge anyone else who might come across a shark in similar difficulties to help it back out to sea if possible, or call their nearest Sea Life centre for help," said Jean-Denis.

"No-one need be afraid of them," he added. "Few sharks, even of the big tropical species, are actually a danger to people, but certainly our native British species are all perfectly harmless."

Smoothounds feed mainly on hermit crabs, lobsters and shrimps and grow to a maximum length of about five feet.