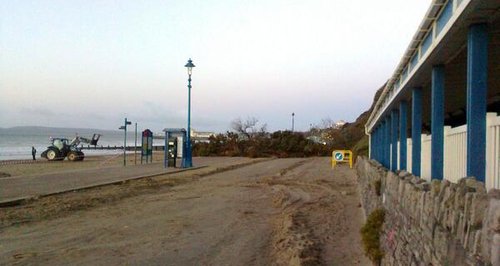 A major study is going to be carried out, looking at the effects of the winter storms on the coast of Dorset and parts of the South West.

Britain has had the wettest winter since national records began in 1910, with "energetic'' storms that saw gusts of up to 108mph.

A £50,000 study, lasting for 12 months, has been launched to examine the direct impact of the weather in south west England, including Dorset.

The storms have affected the county's beaches and seafronts, including causing a landslide between Bournemouth and Boscombe piers (above) and damage to beach huts on Boscombe beach (below). 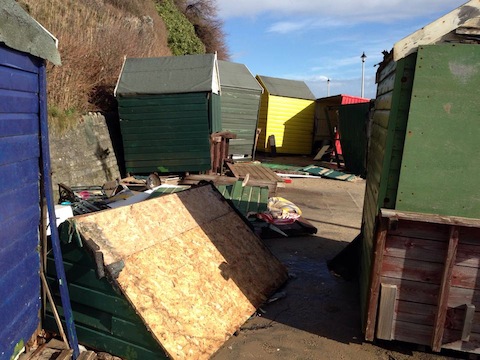 It is hoped the project, carried out by scientists from Plymouth University, will help develop adaptation strategies to protect from future storms.

"The coastal impact of this sequence of extreme Atlantic storms has been very significant.

"At several locations, prominent coastal landforms - such as bridges, stacks and arches - have disappeared, suggesting that at least some of the coastal changes will be permanent. However, many changes will turn out to be, in fact, reversible - such is the nature of a dynamic coastline.

"The extent of the damage and disruption caused by the storms, however, highlights the vulnerability of the coast of England to such extreme storm events and a pertinent question to be raised in this context is how sustainable some coastal communities are in the long-term.

"One of our main goals is to evaluate vulnerability to similar events and get people thinking about the future by exploring ideas about coastal adaptation strategies.''

The study, which has received funding from the Natural Environment Research Council (Nerc), will analyse the effect of storms from December 2013 until February 2014 on coastlines and communities in Dorset, Cornwall and Devon.

Coastal scientists from the university's School of Marine Science and Engineering will work with the Plymouth Coastal Observatory and the Met Office.

Prof Masselink added that initial analysis of wave data has suggested the storms were the most energetic to affect the South West since 1950.

During the project, scientists will measure how the storms affected beaches, cliffs and sand dunes at more than 25 sites, including popular holiday destination such as Porthleven, Bude and Westward Ho!

They will also assess changes to the underwater landscape at two sites on the north and south Cornish coast, and use a wave model to test different wave climate scenarios.

Their work will feed into a Google Earth based Atlantic storm coastal impact map, which will be used by coastal councils and geography students.

"The storms that hit the South West this past winter were some of the worst on record. And with recent simulations suggesting this coastline may become a region of intensified storm activity in future, it's fitting that Nerc is funding this research.''