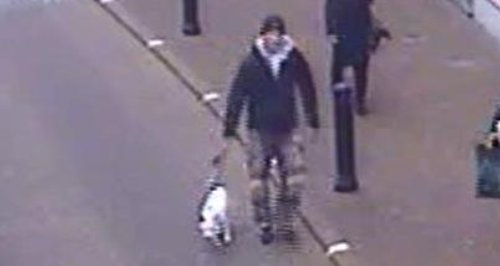 Officers in Weymouth are hunting for a puppy thief - they've released a CCTV image of the suspect.

The theft of Tilly the Staffordshire Bull Terrier happened at around 8.15am on Thursday 30 October 2014 from outside the owner's home in Wyke Road.

Tilly is six-months-old and has a white face, a distinctive black ear, dark spots on her back and a black patch on her tail.

Police Constable Jim Robinson, of Weymouth police, said: "Tilly is a very friendly dog and her family desperately miss her.

"I am appealing for witnesses and anyone with information as to where Tilly may be to contact me in confidence.

"As part of my investigations, I am now able to release a CCTV image of the suspect with Tilly in Weymouth town centre. I would urge anyone who recognises this man to make contact with Dorset Police."

The offender is described as white, of slim build and was wearing a black woollen hat, a grey hooded top and a dark jacket.