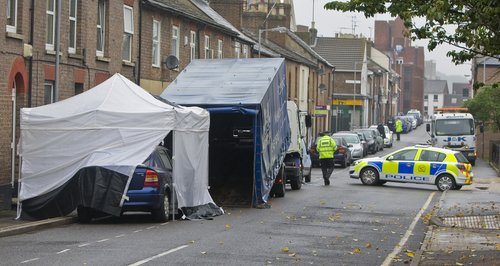 Heart has been told the 43 year-old man who was arrested in connection with a murder investigation has been released on police bail.

The man had been arrested after officers launched a murder inquiry following the death of a 19 -year-old man in Hastings Street, Luton, in the early hours of Friday morning (September 13).

Leading the inquiry, Detective Chief Inspector Sharn Basra, of the Bedfordshire, Cambridgeshire and Hertfordshire Major Crime Unit, is continuing to appeal for witnesses to the incident to come forward.

DCI Basra told Heart: "We are treating this as an isolated incident and some people have already spoken with detectives but we still need to trace and speak with a number of people.

I am particularly interested in tracing four men who were seen going in to an alley way which runs between two houses that have been converted in to flats in Hastings Street. It is believed one of the men then returns to the entrance of the alley way and turns right towards The Butcher's Public House where he stands and is joined moments later by another member of the group. Both men are then joined by the remaining two group members before they all leave the scene towards Elizabeth Street.

Two other men were also seen on CCTV in the area at around the time of the incident.  They are seen to be walking from Hastings Street towards the direction of Windsor Street.

These people may be vital witnesses to the incident and I need them to contact the police urgently."

He continued: "A 43 year-old-man was arrested at a house in Hastings Street on suspicion of murder and he has now been released on police bail (Saturday 14th) pending further investigations. However, this inquiry is in the very early stages and it is important that anyone with information relating to this incident should come forward and assist this investigation."

Anyone with information can contact Bedfordshire Police, in confidence, on 101, or text information to 07786 200011.  Alternatively you can contact the independent crime fighting charity Crimestoppers, anonymously, on 0800 555 111.