New Views Of And From St Albans Landmark

The architects behind the new King's Cross re-development have released new images of what the proposed St Albans Museum will look like.

Beautiful visuals of the proposed new St Albans museum and art gallery have been released by architects, John McAslan and Partners.

Earlier this month, the project passed the Heritage Lottery Fund's Stage C Review, a challenging landmark for the scheme heralding the beginning of the project's next phase. This will involve seeking planning permission for some stunning alterations to the old Town Hall and is subject to the approval of English Heritage.

"This is a once-in-a-lifetime opportunity to add a new jewel in St Albans' crown.

In 1831, George Smith designed the Grade II Listed neo-Palladian Town Hall in the middle of the City to demonstrate the, then, town's great importance.  It was designed for everyone to use.  The Georgian ladies wanted a grand 60 feet ballroom. The locally elected representatives - finding their accommodation above what is now W H Smith too small - sought a larger Council Chamber.

The Magistrates wanted a double height central courtroom with cells beneath to vie with Shire Hall in Hertford. These features are all still here in a building 4 million people walk straight past each year.  Now the City has a chance to create a magnificent cultural hub around these original features." 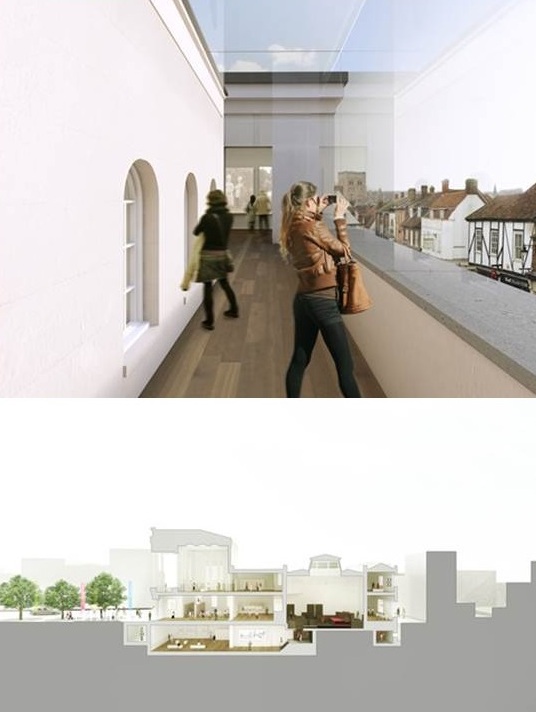 Exciting plans will enable the northern and southern parts of the first floor to be connected.  Contemporary glass wings will be used to create a walkway around the east and west sides of the building.  From these new vantage points, visitors will be able to take in views of the medieval City towards the Clock Tower and the, largely hidden from view, Cathedral and down Holywell Hill.

A changing exhibition programme will be held in this new circular gallery reflecting the heritage our City and District can claim since its early Roman settlement. This includes Alban, the first British Saint; Nicholas Breakspear, the first and only English Pope; and St Albans' central place in the story of Magna Carta.

The country's first hot cross bun originated at the Abbey on Good Friday in 1381. The City was also the location of two Battles of St Albans during the Wars of the Roses and the birthplace of the world-famous Ryder Cup golf competition. Former notable residents have included scientists Sir Francis Bacon and Stephen Hawking and, film maker extraordinaire, Stanley Kubrick.

The ground floor will offer a centrally located reception and information centre directing people to all there is on offer locally.  It will be the stepping off point for visitors to explore the City's 2,000 years of visible history with City Guides, physical maps or electronic apps.

A new temperature-controlled and secure basement gallery will be created under the building to house national touring exhibitions and top contemporary art shows.

The old Ball Room will be able to host dinners, dances, lectures and music performances, as originally intended by the city fathers. In addition, it will provide a wonderful venue for the latest exhibitions and cultural events. Tours, re-enactments and artists in residence workshops are all among the educational content planned.

The history of the building itself is fascinating and will be brought to life in the new museum and gallery. For the first time, the ancient basement prison cells will be fully accessible to the public.  These were once used to house the accused before judgment in the Georgian courtroom upstairs. The courtroom featured in the 1997 Oscar Wilde film  "Wilde". It is hoped the original horseshoe shape of the outdoor railings, once in front of the Town Hall in the Market Square will be recreated with lights or small fountains.