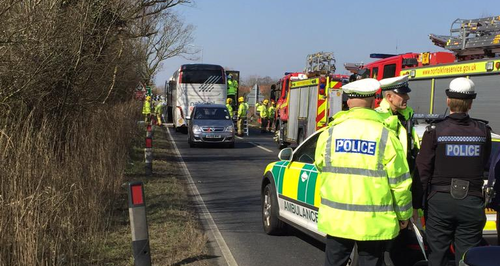 A child, two adults and two other people have been taken to hospital after a crash between a bus and a coach on the Acle Straight.

The Acle Straight is shut both ways after a crash between a coach and bus just after 10 o'clock this morning.

Three fire trucks, ambulance services, police and an air ambulance are in attendance.

Five people have been taken to hospital in two ambulances, we know one of the patients is a child.

The ambulance service says their injuries aren't thought to be life-threatening though.

Meanwhile anouther five patients are being treated on scene.

On scene on the Acle Straight, bus and coach accident. @EastEnglandAmb pic.twitter.com/CJ4OMI2x2Y

The road is currently closed in both directions and drivers are being asked to avoid the area.