Police have released CCTV images of a man they want to speak to, after a man was assaulted and left with facial injuries in Norwich.

It happened in Vedast Street at around 2.40am on Saturday 8 November 2014. The man, in his 20s, suffered injuries to his face.

Anyone who recognises the man in the pictures, or anyone with information, should contact PC Hollie Blaker at Bethel Street Police Station on 101 or call Crimestoppers anonymously on 0800 555111. 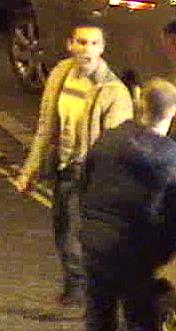