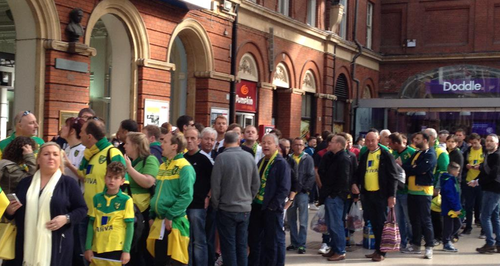 Around 40,000 Norwich fans are heading to Wembley to watch their team take on Middlesbrough in the play off finals.

The match, which has a 3pm kick off, will see the winner promoted into the Premiere League.

After one season in the Championship, Alex Neil's side are hoping to go straight back up to the top tier of British football.

A yellow and green army is now making its way to London.

After a planned national rail strike for today was cancelled, Abellio Greater Anglia have been able to put on extra trains throughout the day from places like Norwich, Thetford and Wymondham to get the thousands of fans to London.

Though traveller's are reminded that trains will be busy, and, due to engineering works, they;ll be stopping at Stratford not Liverpool Street in London.

The club, meanwhile, have had to put on even more coaches than planned, after the first batch sold out earlier in the week.

Though there have been long waits this morning, for people with coach tickets.

Queue for county hall coaches at 8am #ncfc #ncfcatwembley pic.twitter.com/UhZrm6IFNS

Norwich haven't played at Wembley since winning the Milk Cup in 1985, fans certainly hope today will be even more memorable.